You are here:
NewsPress 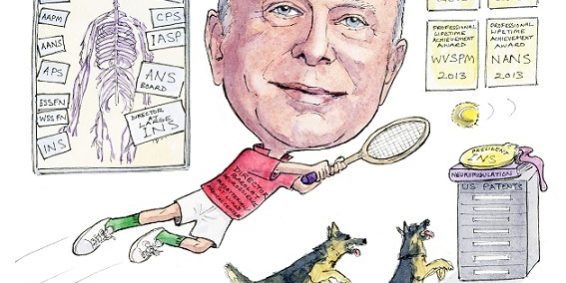 Over a 38-year career, Giancarlo Barolat has performed over 8000 neurostimulation procedures and has seen the field develop and change in a number of ways. In this interview, he tells NeuroNews about his varied experience, his greatest hopes for the development of neuromodulation therapy and his current research focus, as well as his interests outside of medicine.

What drew you to medicine and to neurosurgery and neuromodulation in particular?

My connection with neurology initially, and with neurosurgery shortly thereafter, stemmed from my Dad passing away from a massive stroke. He was in a coma for about two weeks and was hospitalised in a neurology department in Torino, my hometown. At the time, I was in medical school and my inclination was to become a psychiatrist. After spending innumerable hours on the neurology ward, attending to my Dad, I became extremely fascinated by the nervous system. That fascination led me to choose the field of neurology and, subsequently, to sign up for a residency in neurosurgery.

During my neurosurgery residency, in 1976, I was exposed to one of the first spinal cord stimulation implants in Italy. It was a cervical implant performed on a young woman with sequelae of a severe brain injury. She was afflicted by severe spasticity as well as a disconjugate gaze syndrome (MLF syndrome, due to a brainstem injury). When the stimulation was activated, not only did her spasticity completely melt, but her eyeballs moved in tandem completely synchronised. That observation triggered my passion for neurostimulation and my decision to dedicate my professional career to that field.  Since at the time for a young man pursuing that field in Italy was extremely difficult, I decided to move to the USA.

You have been practicing for over 38 years. How have you seen the field of neuromodulation change and develop over that time?

Some of the major changes have been related to the advances in the technology as well as a better understanding of the nervous system as related to neurostimulation. For the first decade, at least, the equipment was extremely primitive and highly unreliable. With some of the applications, particularly cerebellar stimulation, the electrodes would inevitably break within a few weeks/months, and that led to innumerable and technically challenging repair procedures.

Another major change has been the acceptance of the neurostimulation modality in the clinical and scientific communities. This has occurred gradually, with great ups and downs. When I moved to Philadelphia in 1985 and brought neurostimulation to Thomas Jefferson University, everyone looked at me very sceptically, and I am sure that many individuals were just curious to see how long this would last. Even when I moved to Denver in 2005, the medical community, overall, was very much against neurostimulation and I could barely get any referrals. Things, of course, changed drastically after a couple of years of hard work, when I demonstrated the superior efficacy of the modality in treating chronic severe pain.

What has been your most memorable case and why?

I have had so many memorable cases of brave individuals who had been suffering for years from horrible intractable pain and who are, in my eyes, true heroes. One case I will never forget is of a young woman, Carol, who came to me with excruciating constant pain in the face. This was over 25 years ago. Carol had already undergone so many procedures, including sectioning of the trigeminal nerve, without any pain relief. Upon my first visit, Carol looked at me straight in the eyes and said: “Doctor, there are two options here: Either you help me with the pain or I have already planned my suicide in detail”. Obviously that put a tremendous amount of pressure on me. By the way, Carol is still alive and active on social media for people with facial pain.

Over your long career you have performed over 8000 neurostimulation procedures. In your opinion, what has been the most practice-changing advance in terms of treatment options and devices?

The first and most revolutionary advance was the ability to change electrode polarities non-invasively. This was introduced by Neuromed, a company founded by Bill Borkan, in the early eighties. Until then, polarities were hard-wired and the patient had to be operated on to change them. This opened up the world of multi-contact systems and sky-rocketed the ability to deliver a topographically optimised stimulation. The second major revolution has been the development of different stimulation paradigms, such as 10K, Burst and other modalities under development. This is allowing us to speak a neurostimulation language that is more in tune with the nervous system.

What has been the biggest disappointment—i.e. something that you thought would be practice-changing but was not?

My biggest disappointment is related to how, in the USA, the approved indications for neurostimulation, instead of expanding, are becoming more and more restricted. This is a phenomenon of the last few years and is related to insurance companies accepting a progressively more limited number of conditions for which neurostimulation is covered. So, paradoxically, while the technologies are becoming much more successful, an increasingly narrower cohort of patients has access to the modalities. This has been an incredible source of frustration both for patients and providers.

What new techniques/technologies are you keeping your eye on?

There are so many developments in the area of neurostimulation that it is difficult to single out just a few. Vagus nerve stimulation is proving to be, potentially, an invaluable tool in helping with many chronic conditions, such as obesity, depression, epilepsy, asthma and inflammatory conditions. The whole field of peripheral nerve stimulation is being re-developed after many years of inactivity. Implanted neurostimulators specific for headaches are under development. The stimulation of the dorsal root ganglion is showing very promising results.

The ability to affect many different diseases, and not just the traditional pain, epilepsy and Parkinson’s disease. The possibility of actually developing neurostimulation in a modality that can treat diseases such as diabetes, high blood pressure, rheumatoid arthritis, to name a few.

Do you believe that neuromodulation should be the standard of care for the treatment of chronic pain? And how can this become a reality?

What are your current research interests?

I am involved in the development of several extremely interesting technologies both in the field of intra-spinal and peripheral neurostimulation.

Who were your mentors and what impact have they had on your career?

Ross Davis took me on as a fellow in neurostimulation in 1978 at the Mount Sinai Medical Center in Miami. He taught me the principles of spinal cord and cerebellar stimulation for the treatment of pain, spasticity and dystonia. He allowed me to come to practice in the USA, which was a turning point in my neuromodulation career. I will be forever grateful to him. Other than Dr Davis’ contribution, I must admit that most of my experience came from trials and errors that occurred in my own practice. In the late 70s and early 80s there were just not many people around with a lot of experience in neurostimulation.

What advice do you hope your mentees and students will always follow?

Be compassionate and intellectually curious. With neurostimulation you can make dramatic changes in people’s lives. It is up to you to apply the skills and time necessary to obtain some of the most spectacular results in the medical field. On an intellectual basis, this is one of the most fascinating and undiscovered areas of medicine. The field of neuromodulation is exploding, and this is the perfect time to become involved with this exciting modality.

What are your interests/hobbies outside of medicine?

Medicine certainly occupies a very large part of my time. This is certainly not a burden for me, since I truly love what I do professionally. I can say with certainty that I have today the same enthusiasm that I had 40 years ago when I started in this discipline.

Outside of work I have several hobbies. I love to play tennis. I am very competitive and that shows on the tennis court, where I run after every ball, even if I do not have a chance to get to it. I really like photography and I spend a lot of time in the woods surrounding my house in Colorado taking photographs of the scenery and the wildlife.  I love spending time with my two German shepherds, Lupo and Niko. I have developed a wonderful relationship with them and they are an integral part of my life. I love to spend time with my wonderful wife Roberta and like to travel with her.